It has been a while ago I did a series of posts on monitoring tools for BizTalk solutions. Back then I discussed the following tools:

And now there is a new tool made by Saravana Kumar, who I met last MVP summit in person, called BizTalk360. During bus ride from summit back to hotel he demoed me this monitoring tool and I was impressed by functionality and look and feel. Finally there is way for administrators to have a tool similar to administration console, but now web based. The other tools also have a web interface and I still cannot understand why Microsoft hasn’t thought of bringing administration console also in web version (like SCOM 2007 R2!). BizTalk360 is feature rich and I suggest to look at it.

I am impressed by work Saravana has put into it and provided the tool with such a nice UI. User experience in my view is an important factor for a tool to be adopted.I definitely recommend developers and administrators to have a look at this tool and see if it fit for purpose in their environments.It can be download easily from the site after registering. Installation and configuration is easy and straight forward. 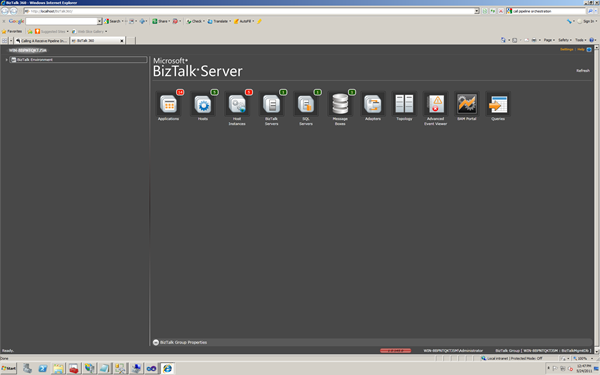 Above you have a screenshot of BizTalk360 in my VM, a single box installation of BizTalk Server 2010. In near future I hope a do a new comparison between current offerings for monitoring BizTalk solutions.